Autism, Eating Disorders, and Body Image: Through the Lens of Sensory Processing

CW: The below content includes realistic descriptions of events and emotions important to Laurence’s story, including mentioning of suicidal ideation, which some readers may find triggering. For support, please connect with our helpline: 1800 33 4673, via webchat or email support@butterfly.org.au

The following content uses terms such as sensory processing, exteroception, interoception, neurodivergence, alexithymia, and synesthesia. If you are not familiar with these terms, it may be useful to read their definitions here.

Over the past decade, it has come to light that autistic females are under-recognized and oftentimes misdiagnosed, leading to a lack of adequate support which has been demonstrated to contribute to mental health issues such as internalized anxiety, depression, and most worryingly, suicide (1). More recently, a growing body of research has emerged evidencing links between autism, ADHD, and eating disorders (2).

However, it is too early to estimate the prevalence of autism or/and ADHD in patients with eating disorders because a) most eating disorder clinicians are lacking knowledge regarding sensory processing and neurodivergence, and b) the vast extent of under-recognition and misdiagnosis needs to be resolved first.

Not only that, but eating disorders and body image issues (body mistrust) also appear to be rooted in sensory processing (3). In addition, dysregulated interoceptive awareness correlates with alexithymia (4). The latter is also a prime factor involved in all subtypes of eating disorders, whether it be restriction or binge eating (5). In other words, atypical sensory perception goes hand in hand with heightened emotional responsiveness – which in turn affect eating patterns and behaviours.

Growing up, I always felt different: awkwardly nerdy, highly sensitive both from a sensory and emotional standpoint, fiercely independent, goofily cheeky, and clumsy. There wasn’t really anyone I could fully relate to, and I eventually came to perceive myself as an alien that had accidentally fallen from a spacecraft to end up on a foreign planet, deprived of existential purpose and belongingness.

My first year of primary school was probably one of the most traumatic as I experienced selective mutism: I didn’t talk to anyone (not even the teachers) for almost a year. I couldn’t even bring myself to ask to go to the bathroom and would wet myself eventually after trying to hold it in for too long. Then, I’d be told off, as if I didn’t feel humiliated enough already.

I could technically speak – but not in unfamiliar environments. After school, I felt overwhelmed as I had spent an entire day in a chaotic environment and couldn’t cope with the social interacting expected from dinner time around the table: strong smells coming from every direction, noises from metal cutlery colliding with glass plates, chewing sounds, microwave beeping, family members talking.

My brain was exploding, it felt physically painful. To reduce my distress from prolonged sensory overload, I would lock myself in my bedroom to eat alone – only to be punished for ‘misbehaving’ afterwards. I felt alone, misunderstood, and sad beyond words.

I didn’t understand how locking myself to eat in peace was ‘pathological.’ I thought that social norms associated with so-called ‘normal’ eating behaviours were subjective and cruel.

As a child, I had extreme reactions to certain sounds (i.e. balloons popping, loud motorbikes), clothes’ tags, or having beach sand on my body: screaming, kicking, biting, covering my ears with my hands, or running around frantically. Back then, I was consistently laughed at and punished for those reactions because no one really understood they were actually fight-or-flight responses rooted in extreme distress resulting from sensory needs not being met – not ‘tantrums’ nor trivial ‘challenging behaviours.’

My subjective sensory experiences were systematically dismissed: “stop over-reacting,” “behave,” “don’t be so dramatic,” “quit being such an attention-seeker.” I also didn’t have many friends at school – I was too ‘weird.’ Not surprisingly, I experienced chronic suicidality throughout my childhood, starting at a young age – around 8-9 years old.

Those episodes of persistent suicide ideation, along with disordered eating, would flare-up during major life transitions or unexpected changes. You can read more about this topic with a poem I have written here.

I cannot remember how many times I absconded from school to escape the overwhelming sensory environment. Since I am able to take in a wider range of sensory input while not necessarily being able to filter out, sensory cues from my environment can cause me to become easily distracted and irritated, rendering me unable to focus properly.

I also cognitively process information about my environment faster and deeper, whether from an emotional or sensory perspective. It has obvious advantages but can also prove overwhelming at times: overthinking and rumination are my perpetual demons. It is also worth noting that my emotional responsiveness is strongly connected with my sensory sensitivity to external stimuli.

Indeed, when I am sad or anxious, my exteroception-related overstimulation threshold decreases: a stimulus that wouldn’t normally cause me distress otherwise can become unbearably annoying and triggering. Conversely, when I am feeling overwhelmed by sensory input, my mood turns into a roller coaster. This aspect of my personality is further illustrated in this poem.

On a side note, while heightened exteroception and emotional responsiveness can be challenging and distressing at times, they also contribute to transcending and Earth shattering feelings of serenity, as illustrated in this poem and drawing.

I developed sleeping disturbances at an early age, and I was oftentimes caught writing poetry in the middle of the night from age 6. Although I didn’t know it then, sleeping difficulties are common among neurodivergent individuals, as nighttime involves less brightness, less crowds and less noise – less everything sensory related.

I also experience disrupted interoception – which I believe is a consequence of unattended exteroception-related support needs: chronic stress as well as disrupted sleep affect a wide range of bodily functions such as immunology, endocrinology, metabolism, and gastrointestinal. I rarely feel thirsty, and if not reminded, I tend to forget to drink.

Moreover, I feel hungry most of the time but rarely experience satiation – meaning I can eat up to the point where my stomach feels like it is going to burst, which induces a scary sensation of imminent death. My body signals aren’t accurate. This aspect made me feel betrayed as well as ‘out of control.’ I used to feel, and this remains a persistent issue (although to a lesser degree), as though I couldn’t trust my own body – which I ended up loathing.

Based on a combination of body mistrust and desperation for social acceptance, I turned to external sources for feedback and reassurance regarding self-perception and self-appraisal (who am I and what do I look like), which rendered me incredibly vulnerable to the detrimental influence of socially constructed beauty ideals such as thinness.

As time went by, I internalized my anxiety and avoided expressing myself by fear of being rejected or belittled. I became a ‘people-pleaser’ in desperation for validation and acceptance. Sadly, I lost track of my identity in the process.

I learned to hate myself, to feel unsafe within my own body, and out of control without understanding why. The environment felt out of control and unpredictable, and so did I. Regaining a sense of control through any means possible, including by engaging in dangerous drastic food intake restriction, was part of surviving within this unimaginably confusing and scary context.

I was re-traumatized later in life when I was misdiagnosed with a “personality disorder” – as if I had not hated my personality hard enough for merely being different. To be told my “personality” was “disordered” was like being hit by a train: the cruel epitome of invalidation and stigmatization. This misdiagnosis not only emphasized and furthered my experience of pervasive trauma, but it also significantly delayed my ability to access the support I actually needed to heal.

My autism diagnosis has been an amazing relief, a re-birth (at 30 years of age): validation, self-understanding, and self-acceptance at last.

My existence finally makes sense, I don’t feel like an alien any longer. I am not ‘abnormal,’ and my personality isn’t ‘disordered:’ I am neurodivergent. In addition, I found ‘my people’ through social media platforms dedicated for autistic individuals in Australia – Meghan, Ruth, Nate. The friends and deep connectedness I had been so desperate about.

Through this process of self-rediscovery, I have become unashamedly hypersensitive, proudly ‘awkward,’ and fiercely driven by topics of interest. I have stopped being a ‘people-pleaser:’ I express my disagreement openly, set relational boundaries without experiencing guilt or fear of rejection, and assert myself more. I am a nerd, I am passionately curious, I advocate for my sensory needs to be accommodated, I happily stim, I am an insatiable critical thinker, I am free-spirited, I am childishly cheeky – and I make no apology for openly being my authentic-self which I had suppressed for far too long. 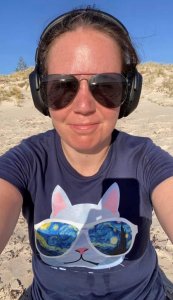 For a summary of Laurence’s  research: https://unsw.academia.edu/LaurenceCobbaert/Eating-Disorders-and-Neurodiversity

The 2022 theme for Body Image and Eating Disorders Awareness week is 'Know the signs, and act early'. We asked our lived experience network, the Butterfly Collective, how early intervention could have stopped their eating disorders from developing and thriving, and how it could make recovery more possible.
Read more