Reducing body dissatisfaction amongst teens: how parents can help

Body image has routinely been identified as one of the four top concerns for young people, and it’s not surprising given our society’s often relentless focus on appearance and unattainable beauty ideals. Over one third of young people are extremely or very concerned about their body image (33.6%).

Further research also indicates that 50% of pre-adolescent girls (aged 8-11 years old) are dissatisfied with their body and show a desire to be thinner than they are[i]. This is similar for boys, with boys that diet at age 7 shown to predict eating disorder symptoms at age 12.[ii]

These figures have remained mostly stable over recent years, however we know the pandemic has resulted in an exacerbation of mental health concerns among young people, including body dissatisfaction and eating disorders, so these factors could also increase body image concerns.

The great news is that parents are in an incredible position to make a difference and create a home environment where all bodies are treated with kindness and respect.

Butterfly’s Prevention team have put together a guide to help reduce body dissatisfaction and body image concerns in your young person, before they develop into something more serious, like an eating disorder.

Why are body image issues prevalent in young people?

Body image issues can be prevalent in the teen age group as this is often the time in which puberty begins, where young people’s bodies can go through many developmental changes and hormones increase. They also have an increased vulnerability due to peer pressure, appearance bullying/teasing and greater exposure to idealised body and appearance ideals presented in media and social media.

Although body image starts developing early in childhood, the tween/teen years is when this is more intensely shaped and influenced by many individual and environmental influences. Positive foundations formed in childhood can greatly protect children as they move through the teen years.

Body image is influenced by many things and is deeply personal and also complex. There are a number of  factors that contribute to how a young person feels about their body and how they look such as; biological factors (genetics, gender, body size, timing of puberty), psychological factors (personality traits, self-esteem, mental health) as well as socio-cultural/environmental factors (family, friends, siblings, coaches, media & social media).

What are signs my teen may be experiencing body dissatisfaction or body image concerns?

It can sometimes be difficult to know if a young person’s attitudes and behaviours towards food, exercise or their body are typical or a sign of something more serious. It’s also important to note that “warning signs” will look and sound different for each individual.

In general, if someone has a preoccupation with eating, food, body shape and weight, and it’s negatively impacting their relationships, schoolwork, self-esteem, exercise behaviours or everyday life, it can be a sign that they may be developing serious body image concerns.

Other things to watch out for could include:

Trust your instincts and seek support if you are concerned it’s something more serious – seeking support sooner when concerned can have a marked difference on body image concerns and can help to reduce and even prevent more serious eating, exercise and body image issues from developing.

If you’re not sure what to say or how to approach your tween/teen, there are some helpful resources to support you.  The Butterfly National Helpline is one of those! 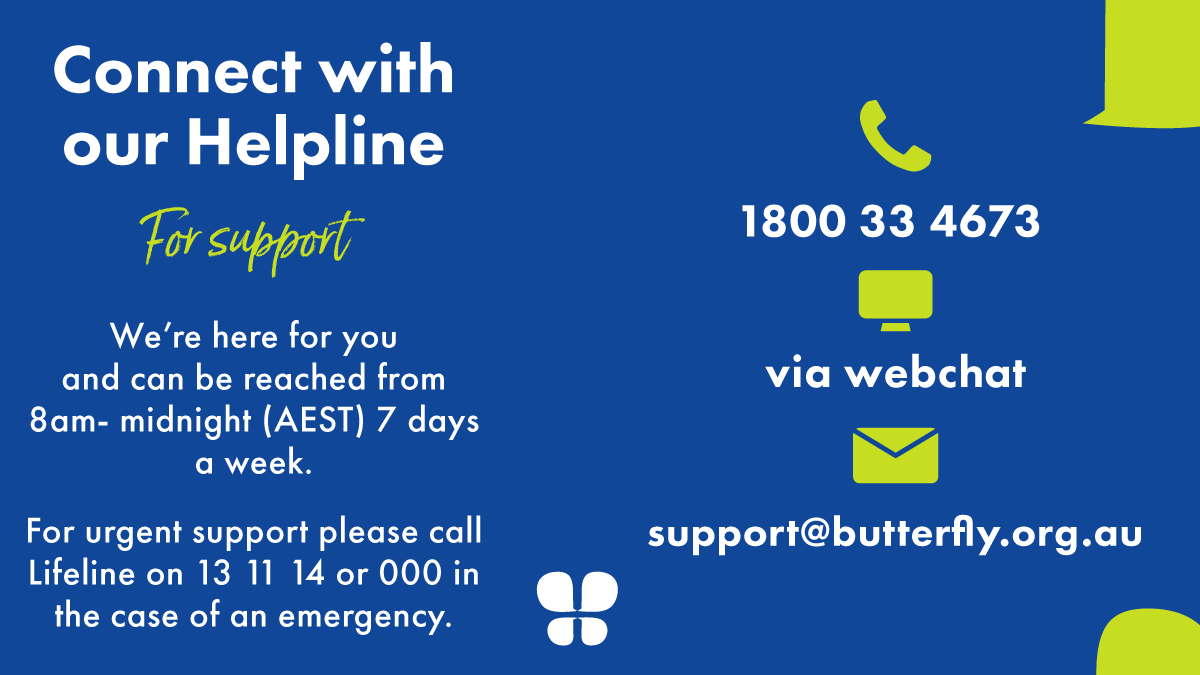 How can parents prevent body dissatisfaction from becoming an issue?

It can be really difficult to hear your young person talk negatively about themselves; however, you can help them by responding to challenging appearance thoughts with a kind, rather than critical, voice. It’s important to keep lines of communication open and really pay attention to their concerns in a non-judgmental way. Encourage them to unpack what they are feeling and why. Let them know it’s normal for people to feel different emotions about their body – sometimes positive, sometimes negative, sometimes a bit of both – and that it’s common for a lot of young people to struggle with issues like these.

Try to avoid focusing on their weight or appearance altogether, particularly if their body is growing and changing which is a natural and necessary part of puberty, as this can place an increased value and importance on weight, shape and image – embracing the changes in their body and speaking positively can help them to do so also.

It can also be helpful to encourage your tween to talk to themselves and their body in the way they would to a friend – with kindness and respect. They wouldn’t say negative things to their friends, so why say it to themselves? Other strategies include encouraging them to admire non-appearance-based qualities and strengths in others and themselves and to do and be more than how they look. Celebrate differences and diversity and acknowledge that even if we all ate and moved the same way, we would all still look completely different.

Words have power and the language used when talking about weight, body shape, exercise, food groups and eating all play a role in how positively or negatively a young person thinks and feels. Being mindful of the language you use and if anything, trying to reduce the commentary and narrative around bodies and appearance can go a long way in supporting young people, but also adults too.  This can help reduce the pressure on everyone.

Being Body Kind starts with you

It’s not always easy to be Body Kind role model to our children, particularly if the parent themselves has a history of poor body image or disordered eating or are just a person navigating life in an image obsessed world, where there are beauty and body standards for all genders and ages.

But it’s never too late to heal your own relationship with your body and doing so can be a really positive step for yourself and your family. If you’re struggling with this, Butterfly’s Body Kind Families also has resources for fostering your own self-compassion, how to talk to your young people, and activities you can do with your tween to promote a positive body image.

While eating disorders are about more than just food, dietitians play a key role in eating disorder treatment. In this blog, we ask a dietitian who works with people experiencing eating disorders for their top tips on ensuring effective and safe practice, while also sharing resources and information that can help health professionals expand their knowledge on eating disorders to better support their clients. #DietitiansWeek2022
Read more