Why I Choose to #BoycottTheBefore

What do you think about when you think of a person with an eating disorder? Do you imagine someone who is underweight? Do you think of the physical effects more than the emotional and mental ones?

There is a trend, which happens especially during eating disorder awareness times, where people in recovery share their eating disorder recovery before-and-after photos to social media. These photos reinforce misconceptions people have about eating disorders.

As a society, we have a problem with primarily only recognizing solely underweight people in eating disorder awareness stories on social media and in the media. All eating disorder sufferer’s stories matter; however, it matters that we uplift all stories and don’t center just one. We also have a problem with inadvertently sensationalizing the mental illness and disqualifying people in recovery who do not have “before” photos or who do not want to share theirs. 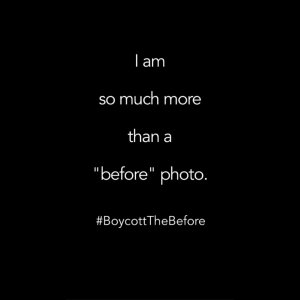 #BoycottTheBefore is a campaign I created to address these problems by discouraging people from sharing their “before” photos, and instead, encourage people to share their story responsibly and educationally. Instead of sharing your “before” photo, you can share a black and white image that reads “I am so much more than a “before” photo. Sharing your story safely also means that no triggering language is used, such as measurements and eating disorder behaviours.

Our struggles cannot be boiled down to a “before” photo; there is so much more to our recoveries.

Our struggles in recovery are primarily mental and emotional, and sometimes physical.

I began seeing eating disorder recovery before-and-after photos in the media and online, posted under the guise of eating disorder awareness. While I felt a bit shocked and triggered to see them, they also initially inspired me to share my own.

One of the first things I noticed though, was that these images are very popular, thus resulting in a lot of media attention, such as “likes”, comments and shares on social media. I wanted this type of validation for myself, which is totally natural. I have lots of compassion for myself for seeking validation this way. In fact, as human beings, we need validation. It is a human need. We need to feel loved, supported and uplifted. We enjoy feeling togetherness and community.

Sharing my “before” photos gave me just that.

I had received mostly positive feedback upon sharing my photos, including some who felt inspired by my story, but I also received negative commentary. A comment that sticks out to me was when someone said I looked “better” in my “before” photo, which made me feel very sad and almost defeated at the time.

Another comment I received upon sharing my “before” photos was someone claiming I was not “that troubled”, likely in regards to what I looked like because they may have seen “before” photos where the person weighed less and assumed that the weight is what it comes down to, which is so far from the truth. These comments influenced me into rethinking sharing such photos.

Where the public may believe misconceptions due to unnecessary details and photos we share, I realize it is within my ability to break down these misconceptions by not sharing the photos or details.

This is in the hopes that  people will be less inclined to say triggering things like I looked “better” when I was underweight, or assume I did not have a valid struggle because of what I looked like.

When we share our stories publicly, we unfortunately open up commentary from anyone, including those who may harm us. While this comment did not harm my recovery, it could harm someone else if they were told a similar thing. Someone could feel compelled to restrict or use other disordered behaviors to lose weight in order to match their ‘before’ photo.

I also received many comments from people in the recovery community over the years saying I triggered them or warning me that I could trigger others. I usually was quick to disregard these concerns because I thought it was “right”.

It has taken me time, self awareness and unlearning of what was taught to me to come to the decision to delete my before-and-after photos and choose to Boycott The Before.

I feel like I used my sick pictures as a crutch, as a way to hold onto my eating disorder and validate myself.

I am in recovery and a higher weight now.

Being a higher weight, I receive comments time-to-time telling me I am promoting obesity or need to lose weight. It is so important that we celebrate all bodies.

It matters that people choose not to “concern troll”, which is the act or practice of undermining someone by expressing disingenuous concern. This is particularly true for people of higher weights because our health is our own business and no one else’s – you cannot perceive the health of someone just by looking at them.

Since I am a higher weight now, I felt tempted to prove that I once was smaller. It makes sense why I felt like I had something to prove, because diet culture can influence us. It is healing to let go of the
feeling that we need to prove ourselves and focus on feeling better and responsibly sharing our  stories.

I also felt like I had no choice but to prove my suffering by sharing my “before” photo because social media has very visual platforms.

I felt as if my words were not enough, and like I had to show what I looked like at my sickest. This is very dangerous territory to embark on because someone can be severely struggling with an eating disorder at any size.

I was severely struggling with an eating disorder at many sizes — larger and smaller.

So, when we inadvertently claim this is what illness looks like; that underweight is the one true eating disorder suffering, we leave out many, many other recovery stories. By doing this, we invalidate other people’s journeys as we validate and center our own sickness.

I encourage you to join me in #BoycottTheBefore. There is so much more to our stories than being underweight. Let’s talk about the mental distress and emotional toll. Let’s educate the world on what eating disorders are as a whole without sensationalizing the mental illness. We are so much more than our “before” photos. 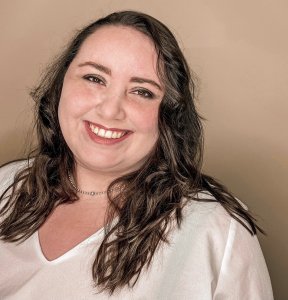 Lexie Manion is a writer, artist, student and mental health advocate. She writes about mental health and body acceptance topics, and shares her personal recoveries from mental illness. Lexie has written for Healthline, Cosmopolitan, NAMI and The Mighty. She plans on becoming an art therapist, as she has a deep love for creating art that reflects different emotions and experiences. Lexie strongly believes art and writing can be cathartic. You can find more of her work at lexiemanion.com or follow her on Instagram at the handle @lexiemanion.

For more advice on how to safely share your story and the correct portrayal and reporting of eating disorders, the Mindframe Media Guidelines can help. In general, Butterfly recommends content is free of triggering language such as reference to specific eating disorder behaviours, numbers, weights and measurements. For more information on how to safely engage with Instagram, you can head to our guides developed with the platform here. 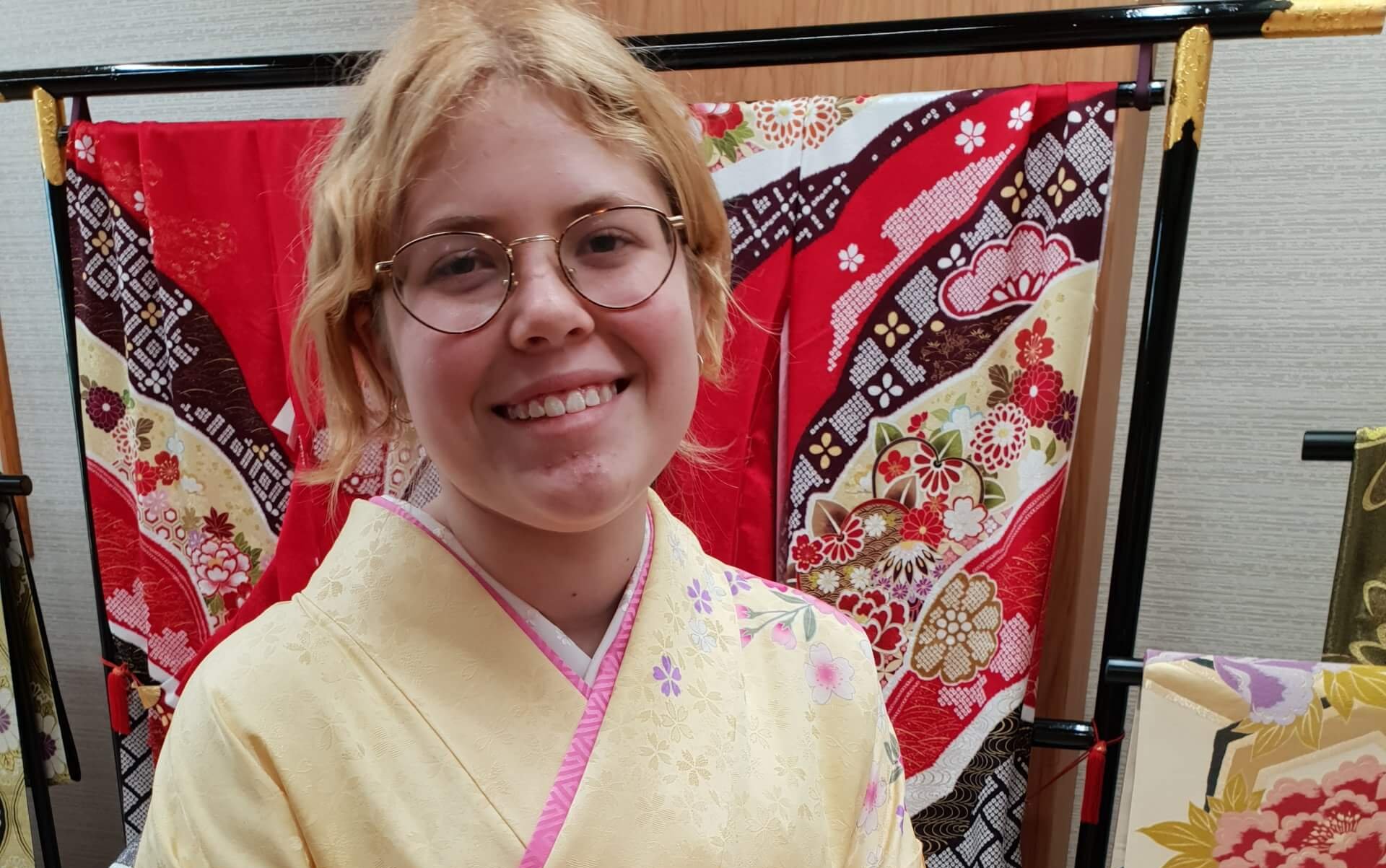 Autism, Eating Disorders and Me

Research indicates that 20-30% of adults with eating disorders are also Autistic, and the likelihood of having Autism is more than 15 times higher among people with Anorexia than among those without. But a lack of awareness among the public and healthcare providers means many go undiagnosed, and traditional eating disorder treatment models are often unsuitable for Autistic people. In this blog, Melanie shares her experience with autism and eating disorders, and what would have helped her.
Read more